I just feel that I have to write a new post today, because of everything that has happened in Mexico, Ukraine and the UK today. Before I start here is the link to todays song provided from YouTube and I don’t own the copyright to it.

Firstly, the US fired (or threw) tear gas canisters into people looking to escape from the terror at home. They thought they would be able to ask the US for asylum to keep them safe and instead were met with even more horror.

This atrocity didn’t take place on US soil, so the US opened hostilities in a neighbouring country which is totally against the United Nations Charter on Human Rights since the US and Mexico are not at war with each other. People seeking asylum in one country have to be in that country so by keeping them out tRump is following his own agenda again. There has to be money in it for him or else he wouldn’t do this.

On the same day across the other side of the World, Russia under Putin, have declared water rights all the way around Crimea, which the world refuses to acknowledge as a Russian satellite state but still as part of the Ukraine. This means that Putin is also guilty of violating sovereignty of a recognised country and member state of the UN. This has to be followed up by diplomatic means with the threat of force to follow if Putin doesn’t immediately withdraw from Crimea and hand it back to the Ukraine.

Putin and tRump hogging the headlines again, what a surprise. Each hoping the other will hide what they are doing from the world, but forgetting that with the Internet we can all see what they are doing. If anyone had any doubts that they were in collusion recent events should have removed every last one.

Back at home here in the UK, Theresa May expects Parliament to get behind her half ass deal for Brexit, which will leave the UK paying the EU for decades to come to remain within the boundary for the single market and free movement of people, paying for the privilege, without a seat at the table and with the EU able to say when, or even if, we can get out of this. The EU would also decide when Gibraltar is given to the Portuguese and when a hard border would be put in place between Northern Ireland and Ireland.

The Irish don’t want a hard border and have told Mrs May that they will never accept a hard border since they voted to Remain within the EU. If a hard border is forced upon them they will introduce a bill through their assembly for a referendum to split up the UK, rejoin with the Republic of Ireland and get back into Europe that way, since the Republic has never tried to leave and has adopted the Euro as their currency.

If Northern Ireland voted to split up the UK (which is very likely given the strength of opinion there against the UK government) how long will it take before the Scots ask for a referendum? I reckon about 2 weeks, give or take 13 days. So with one stroke she has tried her very best to not only shaft the entire UK but will also seek to destroy the UK. The leavers won by a very small margin in 2016 but David Cameron was too weak to look at the result and ask for a second referendum before agreeing to leave the EU. Theresa May doesn’t want a second referendum so is trying to shaft the country to get her Brexit non-deal pushed through by MP’s.

Too many people have asked her to reconsider the deal and to ask the country before accepting it to re-elect her for a second time. She is currently in a minority government as neither of the major parties had enough MP’s to form a majority government. Most of the sitting MP’s have been told by their constituents to turn down this Brexit deal and they know if they want to be re-elected at the next election, whenever that will be, they have to listen to their electorate and vote the deal down.

The time has come to stand up and be counted, there is a resistance movement in the US to try and make tRump accountable for his breaches of power and also to prevent Russia meddling in the Politics of the American people in the future. We need to do the same in the UK, there is a swing away from Brexit now that people have learned the hard truth of what Brexit will actually mean.

Time to stand up and be counted, we need to stop the bullies now. End hatred and divisive politics once and for all and also find a way to unite our respective countries behind the new dawn which will see a fairer future for everyone. Accepting human rights for any group in our society does not diminish our rights, it strengthens them. Human Rights are not pie, they are what we should all have the right to expect as a minimum standard from everyone else. I would like to post a picture here if I can get it on my laptop. 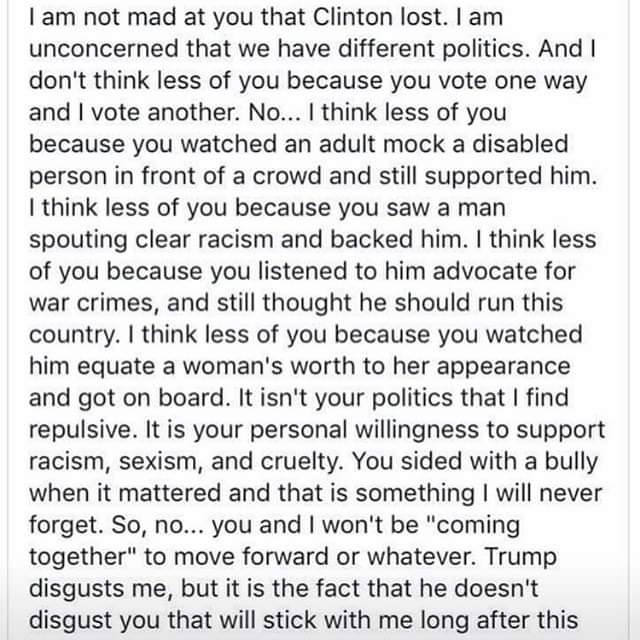 This I found on a post by @MattStout07 on twitter. Like me he doesn’t hate anyone, tRump disgusts him as he does every decent human being on the planet and the fact his followers hate everyone that tRump hates also disgusts us. If you are already on twitter then you could do a lot worse than follow Matt and his husband but not very much better. He has the best sense of humour of any American I know, almost as much as the Canadians. Anyway, I hope you enjoyed this post even if you already knew about the Real News stories I shared. If you didn’t know all of them, then I’m glad to have been of service, if you needed proof that there is a resistance movement afoot in both of our countries then there is and I’m so pleased that there is. There is also a resistance movement in good old Australia as well, being on the other end of the planet I’m not sure what they are resisting and for that I am truly sorry. If anyone knows please tell me as I would like to know what is going on there. Same with Canada, New Zealand and other country around the planet. If you have a government not doing its job to protect and unite its citizens then I’m with the resisters. Together our voices are stronger and louder than the arrogant bullies out there, no matter how many of them there are. We won in 1945 and we can do so again, whichever country is led by a gasbag who shouts down the opposition because he has no argument to put forward.